Just four weeks ago my deaf boxer puppy Nitro broke his toe. This has been a very emotionally draining situation. I have had the Vet rewrap his paw on four different occations. The first time we had him checked and rewrapped it was because I noticed he had stopped walking on his splint. On our next visit to our Vet we requested that they unwrap the bandages and check to see what was going on. Well sure enough we were horrified to see the splint had twisted causing the skin to infected. So we took the splint off, washed the leg and we proceeded with laser light therapy. By the third week I requested the bandage be changed again to see what was going on under all that vet wrap. This time when they unwrapped his paw they found he had a raging yeast infection in his entire paw and up his leg. We ended up taking him home with no wrapping on his leg. Keep in mind the bone on his toe was only partially healed (we had more x-rays done while we were there). So the vet wanted us to soak the leg twice a day in a anti-yeast soak and add medicated power to the area after the leg was dry after each soak. I decided instead of taking him back to have his foot wrapped again, I would just have him attached to me for the next three weeks to keep him from being to active. In the mean time his foot had atrophied so badly that I felt he needed to  start gently using it again regardless of the fact it wasn't fully healed. 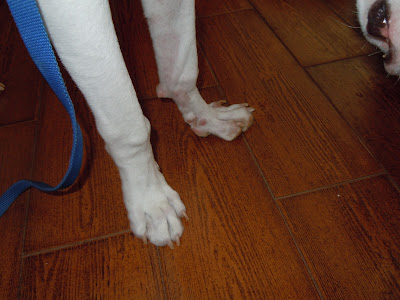 As you can see from this photo his left foot has muscle atrophy. See how the foot curves upward instead of downward gripping the floor.

My next step was to follow all my steps to keep a puppy busy with a broken toe and also add some additional activities so we both don't go crazy. Click here to read tips on "What Can You Do To Keep A Puppy From Playing When He Has A Broken Paw?"I decided to just drive around with Nitro in the back seat. He has never experienced the back window being open before so I thought it might be a treat for Nitro to get some fresh air. 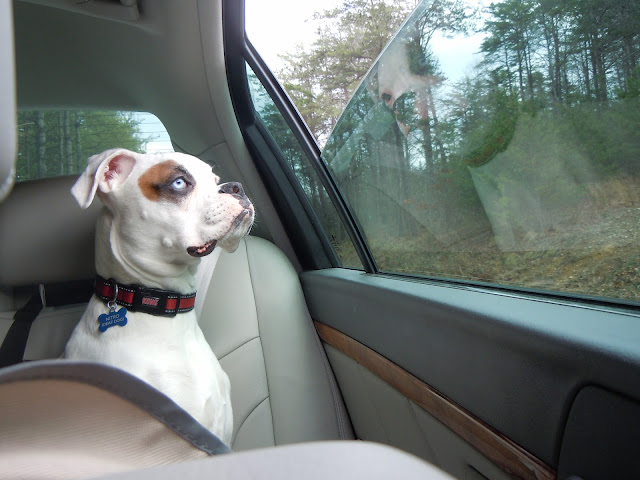 In this photos he is just taking in the sites on our country road and starting to feel the air come in through the window. 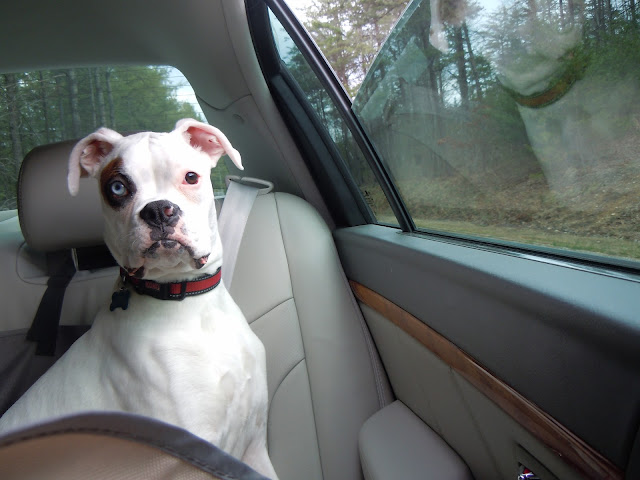 He is looking at me going...hey who is driving this thing if you are taking pictures of me! I did pull over to the side of our little country road to take these photos...no worries.... 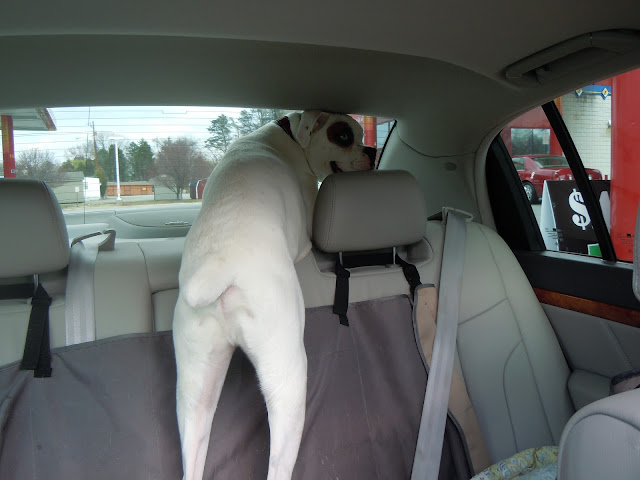 Here we are getting gas and Nitro's daddy went into Sheetz to get us a shake. Nitro always gets up in the back window to watch for us to come back. This time he is watching for Chris to come back to the car. I have noticed lately he is becoming more protective in the car when I am alone. Such a good boy! 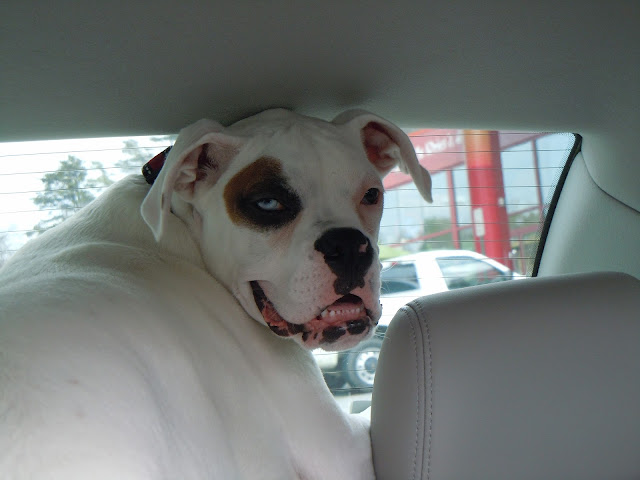 Look at that "mugshot" 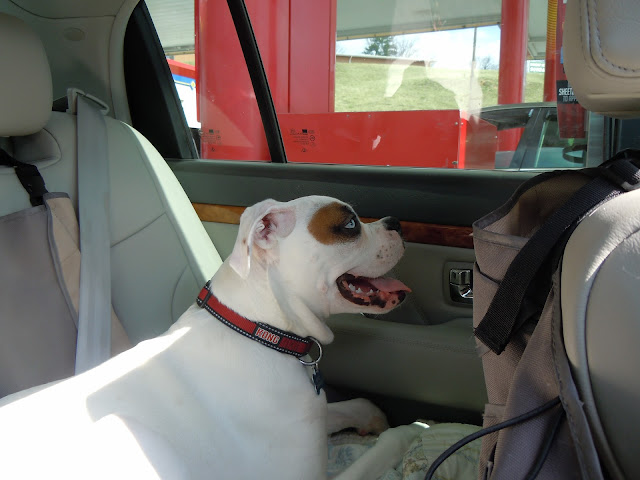 As you can see from this photo we purchased one of the dog car covers which acts kind of like a hammack. He likes to sleep up against the front seats in the part of the cover that hangs over the foot area in the back seat. 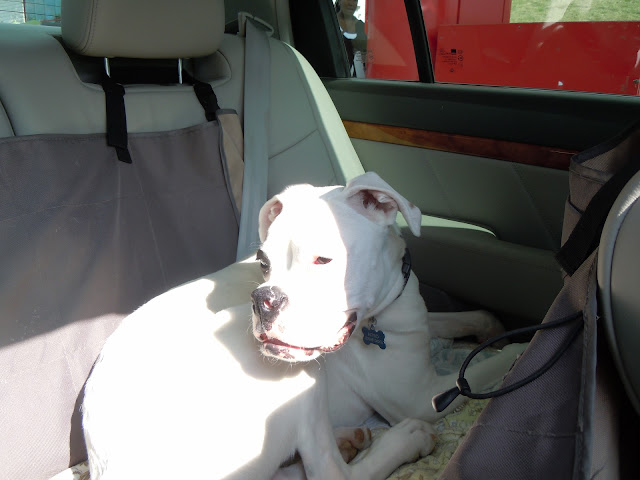 
So now we are trying to get more exercise on soft grass. Nitro and I go out into our front pasture to get low impact exercise. What that really means is he is attached to me while I pick up all the sticks in the front pasture from past wind storms. Here are some photos from yesterday (it was 78 degrees). The grass is turning green and we are both very excited to have spring finally here for awhile. 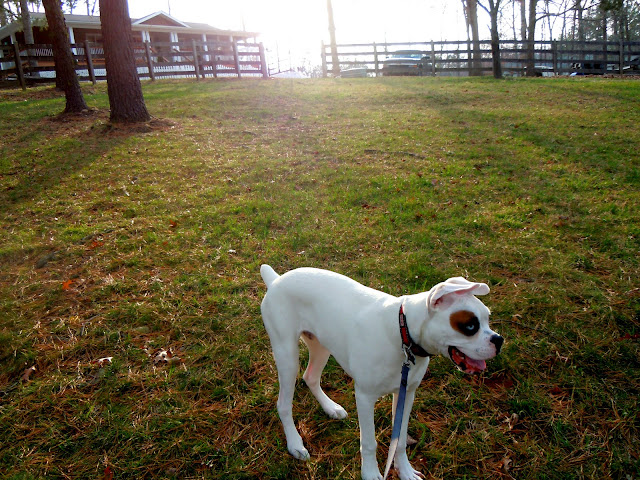 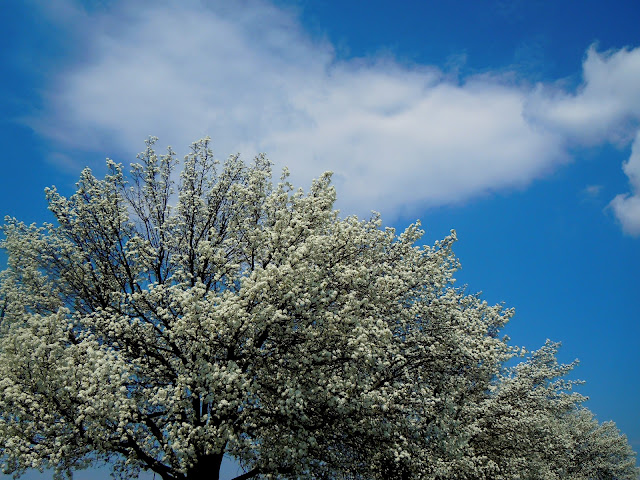 All the white pear trees are in bloom here and it is so beautiful here in the springtime! 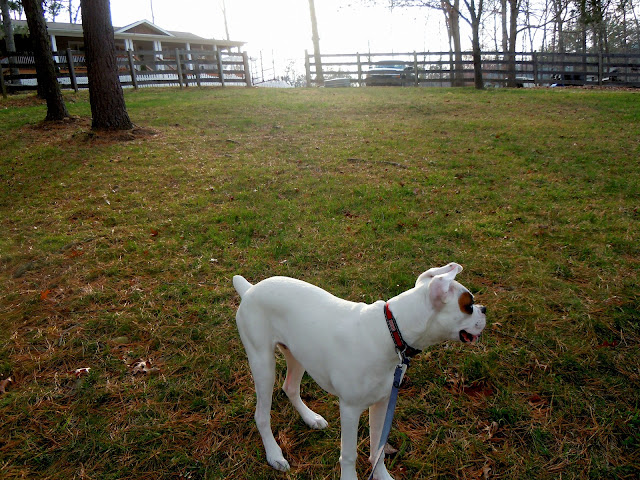 Nitro in the front pasture attached to me while I pick up sticks...every now and then he grabs a stick out of my hand and tries to run away with it but he doesn't get very far since he is attached to me. 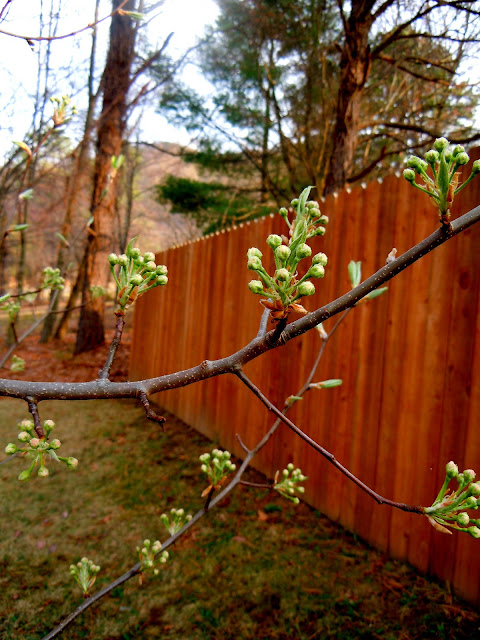 My little white pear tree I planted two years ago finally has some pretty flower blooms on the branches this year! 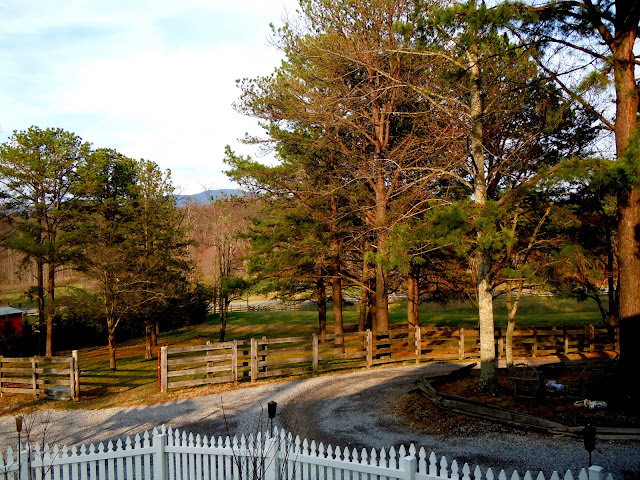 We are very fortunate to have horse pastures and two fenced yards (one in front and a big one in the back) for our dogs to frolic.
Posted by Christina at Tuesday, March 22, 2011