Dog Survives A Month In Burned Out House 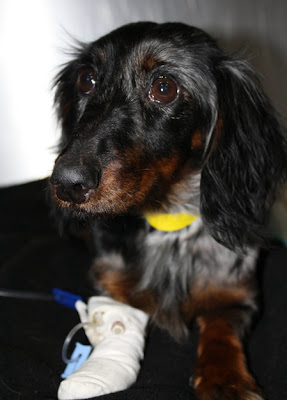 Photo: Brian Adams/MSPCA-Angell
Lola spent about a month in the wreckage of a burned-out house.
By Brian R. Ballou, Globe Staff   (article from: boston.com 3/22/2011)
A Boston woman who lives in Hyde Park cried tears of joy this week after finding her dog alive among the ashes of her burned-out and boarded-up house, where the dog had survived since a blaze totaled the residence on Feb. 23.

Terisa Acevedo initially thought that Lola, her year-old long-haired dachshund, escaped the blaze and was wandering through the neighborhood. In the days after the fire, the 24-year-old EMT and Northeastern University student posted fliers on telephone poles and walked the neighborhood hoping to find her dog. But as the days turned into weeks, Acevedo began to think that Lola perished in the fire.

But on Monday Acevedo returned to the house to shut off the alarm on a truck she was keeping parked there, and she heard a scratching noise at the boarded-up front door. She immediately knew it was Lola.
Acevedo yelled out her pet's name and with the help of friends, tore the plywood off the entrance. Lola, apparently out of fear, retreated into the blackened interior of the house. But when Acevedo called out her name again, Lola ran into her arms.

"It was a miracle," Acevedo said yesterday, hugging her dog at the Angell Memorial Animal Hospital in Jamaica Plain, where Lola is being nursed back to health.

Originally published on the blog MetroDesk.
Posted by Christina at Sunday, March 20, 2011