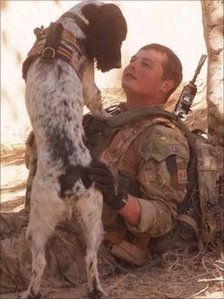 L/Cpl Tasker's body returned to the UK, with the ashes of his dog Theo
The body of a soldier who died along with his record breaking sniffer dog in Afghanistan last week has returned home to the UK. Lance Corporal Liam Tasker, from Kirkcaldy in Fife, was shot dead while on patrol in Helmand province. The ashes of the 26-year-old's dog Theo were flown home on the same plane.

L/Cpl Tasker, who was called a "rising star" by Army chiefs, was shot by Taliban snipers and Theo died of a seizure shortly after his master. The soldier and his 22-month-old dog had made 14 finds in five months while on the frontline. The pair's successes at uncovering so many explosions and weapons had resulted in their tour of Afghanistan being extended by a month. Just three weeks ago, springer spaniel Theo was praised as a record breaking Army sniffer dog.

The body of L/Cpl Tasker and the ashes of Theo were flown to RAF Lyneham in Wiltshire at lunchtime, before a cortege passed through Wootton Bassett, the Wiltshire town which has built up a tradition of welcoming back fallen heroes.
Posted by Christina at Tuesday, March 08, 2011