Since my Aunt lives on Marco Island and my cousin also has a vaction home there I thought this story was amazing!
Doggy-paddling Doberman saved by 'Flipper'
by Chad Smith - Pocono Record Writer, March 02, 2011 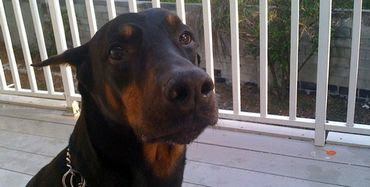 Turbo, a Marco Island Doberman, is safely back at his home and with his
family after resisents say some dolphins helped the dog stay afloat in a
canal for serveral hours - Photo by Melissa Evanko/Pocono Record
When Audrey D'Alessandro of Paradise Township was on vacation last week in Florida, she and a team of rescuers came together to save a dog trapped in a canal near her vacation home. And who else made up that team of rescuers? Her husband, firefighters — and two dolphins.
It all started when D'Alessandro and her husband, Sam, walked out of their home on Marco Island, near Naples, to go fishing. Behind the home is a canal where "we saw these two dolphins and they were splashing and making this big commotion," said Audrey D'Alessandro, a 16-year Pocono resident.
Dolphins usually swim through the canal behind the home, as it leads into the Gulf of Mexico, but this time the dolphins weren't just passing through. "They were just there, in one place, splashing water against the canal wall," she said. When the couple went to investigate, they saw that an 80-pound Doberman pinscher had fallen into the canal. The dog was standing on a sandbar and was half submerged in the water. (It was low tide at the time.) The dog, which had gone missing from someone's home 12 hours prior, was too weak to bark, she said, and the dog couldn't get back onto land because it couldn't climb up the canal wall, which was several feet high.
By the time D'Alessandro, who works as a delivery and labor nurse at St. Luke's Hospital in Bethlehem, lowered herself into the canal to get onto the sandbar where the dog was standing, the dolphins had already gone.Read full article here
Posted by Christina at Wednesday, March 02, 2011