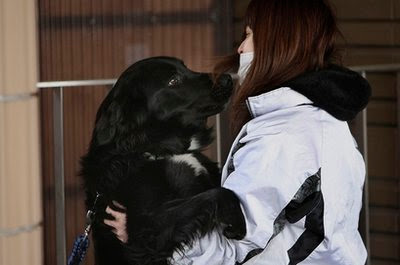 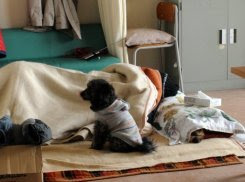 (A pet dog is seen sitting next to it's owner covered in blankets from the cold, at an evacuation centre in Sendai, Miyagi prefecture). 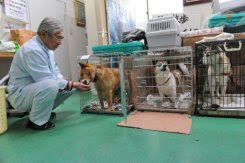 Hungry, hurt and separated from owners who are either dead or in evacuation centres, hundreds of family pets are struggling to survive in the desolation of Japan's tsunami-ravaged northeast coast.

Among the many rescue teams sent from around the world to search for survivors and bodies after Japan's worst natural disaster for nearly a century, a handful of specialised animal rescue groups have also been at work. In the days immediately after the March 11 tsunami that wiped out dozens of thriving coastal towns, the prospects looked grim. "In the hardest hit areas, we saw no animal life whatsoever," said Ashley Fruno, from animal rights group PETA. "We did see some paw prints in the mud at one point, but they didn't lead anywhere, and we could not find any animals nearby."

Slowly but surely, however, abandoned pets began to emerge, often from damaged homes where they had managed to ride out the destructive force of the tsunami. Many pet owners left their cats and dogs when the tsunami warning sounded, never imagining that the wave would be as large and powerful as it eventually was.
The animals were left to fend for themselves in a hostile environment with no food or fresh water.
Read full article here


Hundreds maybe thousands of pets are strugging to survive in the desolation of Japan's tsunami-ravaged northeast coast. If you would like to help out the animals of Japan click on the following link:
World Vets effort for animal relief in Japan