A Heart Warming Story About The Rescue Of Tessa

Horse folks are amazing people. They really are some of the biggest animal lovers you will ever meet. Not only do they rescue horses, goats, cows, chickens, duck, and cats but many of them have rescue dogs. I have a girl friend that has 7 dogs on her farm! A few years ago we wrote about my friend Stephanie and her heartbreak when she lost her precious dog Valentine. She was so sad because Valentine was that one special dog in her life that actually choose Stephanie. Below are some photos I had in my file folder of Stephanie and her late dog Valentine. 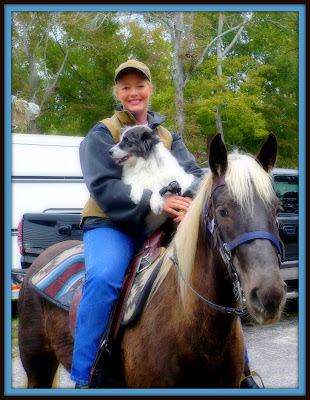 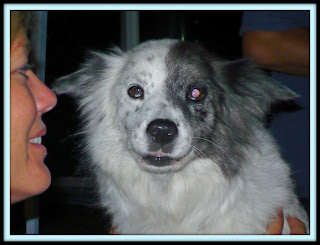 When Stephanie mentioned her "dump dog" I asked her to send me the story about her rescue of Tessa.
The following is Tessa's Story.

I found this cute red head on the roadside one evening last summer. We were on our way to dinner at the Peaks of Otter. We take Rt. 43 through Buchanan to hit the parkway and there she was on the side of the Mountain, just standing there watching the cars go by. This concerned me knowing the area has no houses around. It is a steep mountain road with an impressive drop off on one side of the road and a mountain going straight up on the other side. As we slowed down to get a better look at her another car did the same. They began to back their car toward her. I figured they would help the lost dog and we continued on to dinner.
We had a nice gathering of friends for dinner and took our time eating and socializing. As we headed back down the mountain, there was that red dog, in the same spot. She was lying beside the road with her head down. I couldn’t believe she was still there in the same spot some three hours later. I asked my friend that was driving to backup. I had to see why that dog was in such an odd place. As I got out of the car she ran and disappeared down the embankment somewhere. I couldn’t see her in the dark. I called with my nicest doggie voice but she didn’t fall for that. My friend suggested her doggie bag of leftover meatloaf might help. I broke off several bites and tossed them down the Cliffside. I couldn’t see her but could hear her rustling around. It worked! I tossed several more closer to me until I could make her out. She was very hungry and very thin. I sat down with my back to her and kept tossing small pieces closer and closer until she was comfortable beside me. She was timid and scared but I had her eating from my hand and began to rub her. She didn’t care what I did; she was so focused on the meatloaf. My friend tossed my a leash and I slipped it around her neck, lured her to the back of the hatchback and put her in. I climbed in the back to reassure her and she settled on the way home and curled up beside me. I could tell she had been on her own for some time. She was covered in Ticks, fleas and had a terrible case of ringworm. I had to keep her in a kennel and bathe her every other day to keep her from spreading the ring worm to my other two dogs

I placed several ads and contacted Animal control and filed a report of a found dog but no one contacted me and several months passed. She was very intelligent and curious in a timid kind of way. I nursed her back into health and she really began to flourish. I wondered if someone may have lost her while hiking the parkway or maybe she jumped from a car traveling and got lost in that remote area. She now goes to work with me almost every day. She loves to play with my client’s dogs and we all stand and laugh as she even gets the oldest and grouchiest dogs to somehow chase, wrestle and roll around with her. She also follows along as I ride my horse and loves to go just as much as I do. She keeps her eyes on my and never gets far away. She listens and does just as I tell her. Not the typical training issues I’ve had before with other young dogs. I have fallen head over heels for this little red head I named Tessa. 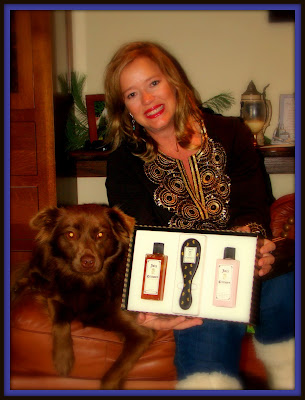 Above: Tessa and Stephanie (check out Tessa getting a Juicy Couture Dog Groooming set)
Below: Tessa on Christmas Day 2010 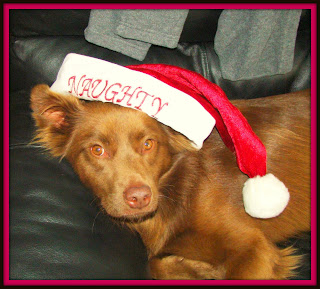 Thanks Stephanie for Sharing Tessa's story with The World According To Lexi!
This is such a heartwarming story. I am reading A Dog's Purpose now and just reading this story about Valentine and Tessa makes be believe the author of A Dog's Purpose, W. Bruce Cameron is really onto something. Hugs and Kisses xoxoxxo Lexi and Christina
Posted by Christina at Wednesday, January 05, 2011