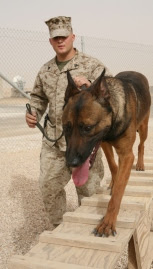 Kelsey and his handler
working and training in Iraq  (Dept. of Defense photo)
Even though our pooches at home have it made (especially Lexi, Tallulah and Nitro) there are dogs out there with a purpose. These are working dogs that are trained to work with our military and then move onto official police work here in the states.
Police Dog Served In Iraq - Topeka Capital - Journal -cjonline
By The Associated Press
MEDICINE LODGE - As a veteran of the Iraq war, a 6-year-old German shepherd has a new job: sniffing our narcotics in Kansas. Gera spent her military service detecting roadside bombs, and now she has become a narcotics and patrol dog in Medicine Lodge. Gera had to retrain her nose from improvised explosive devices to narcotics. Medicine Lodge Police Chief Brian Miller said Gera also has shown her soft side when doing demonstrations for school children.
Because he had owned and trained with two previous police dogs, Miller said he was able to adopt Gera from the Air Force for no charge. As a trained dog, she's valued at $8,000 to $10,000. Miller also is an Air Force veteran, serving in the 1980s and being a reservist after until being called back in 2001. Gera wears a uniform that has a halter bearing a shiny police badge. The German shepherd also spends most of her office time chewing on a deflated basketball and a heavy-duty chew toy. "They're both good for changing her soft bite into the tougher, hard bite she needs for protection and apprehension," Miller said.
Gera is on call 24 hours a day and lives with Miller. The two have bonded, and she never lets him out of her sight, Miller said. "I've tried to sneak away when she's napping, but she always has one eye open keeping track of me," he said. Miller said Gera is friendly unless commanded to strike, which makes her an ideal backup partner on patrol. "People may argue with me, but they don't argue with my dog," he said. Miller said the dog becomes a deterrent around suspects and is attentive to anyone who stops by the station. The Medicine Lodge Police Department has maintained a canine officer for the past 23 years
Posted by Christina at Tuesday, November 30, 2010