Photo Of The Week - Little Piper The CEC! 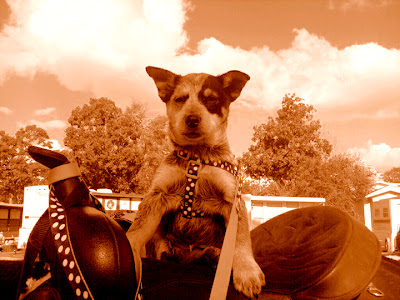 This is Piper the CEC! What is a CEC you ask. Why it is a Cheif Executive Cowdog of course! Piper is 9 weeks old and he is owned by CEC (Cheif Executive Cowchick) Casey Claar. This photo was taken about a week ago at this year's Myrtle Beach American Heart Association's Ride. Piper is an Australian Shepherd. Aussies as many folks call them is a breed of herding dogs that was develped on ranches in the Western United States. Despite its name, the breed commonly known as an "Aussie" did not originate in Australia. They acquired their name because of association with Basque sheepherders who came to the U. S. from Australia. Here is more info on the Australian Shepherd
Posted by Christina at Wednesday, November 17, 2010