Article from ScienceDaily
Children whose families own dogs are more active than those without, according to new research. Researchers from St George's, University of London studied 2,065 children aged nine to ten, and found that children from dog-owning families have higher levels of physical activity compared to children without. 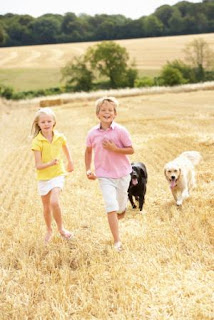 (iStockphoto/Catherine Yeulet)
The team says owning a dog could encourage more children to be active, and help combat rising childhood obesity.The researchers, led by Dr Christopher Owen, senior lecturer in epidemiology at St George's, used activity monitors to record the children's daily movement levels over seven days. They studied children aged nine and ten in 78 schools in London, Birmingham and Leicester. Of the total participants, 202 (around ten per cent) owned dogs.The results -- published in the American Journal of Public Health -- showed that the children with dogs spent an average of 325 minutes doing physical activity per day, 11 more than those without dogs. This included time spent in light, moderate, moderate to vigorous, and vigorous activity. Dog owners also spent 11 minutes less (562 altogether) in sedentary behaviour each day. They were found to take 360 more steps (four per cent) than the others.

Dr Owen said: "The more active lifestyles of children from dog-owning families is really interesting -- is it that owning a dog makes you more active or that more active families choose to have a dog? It's a bit of a chicken and egg question. Long-term studies are needed to answer it, but it may be a bit of both."
"Previous studies have compared adult activity levels before and after getting a dog, and found that they do become more active afterwards. This study is novel in showing that children who have a dog are more active, but, again, long term studies are needed to see if the effect is seen before and after owning a dog."

Adults who own dogs take 1,700 more steps a day on average than non-dog owners -- a 25 per cent difference. The latest study says that the smaller difference in children with dogs compared to adults with dogs is 'unsurprising', and suggests that the physical activity they take with their dogs probably makes up less of their overall level of activity than adults'. Dr Owen added that further work is needed to determine how much of dog-owning children's physical activity is actually undertaken with their pet.

He said: "If children really are going for walkies with their dog, this may be one way to encourage more kids to be active." The study was carried out as part of the Child Heart And health Study in England (CHASE), a St George's project examining the health of about 5,000 primary school children living in London and the Midlands. The study is being undertaken with the support of the Wellcome Trust.

Editor's Note: This article is not intended to provide medical advice, diagnosis or treatment.
Story Source: Science Daily (Sept 22, 2010) The above story is reprinted (with editorial adaptations by ScienceDaily staff) from Materials provided by University of St George's London via AlphaGalileo.
Posted by Christina at Monday, November 15, 2010