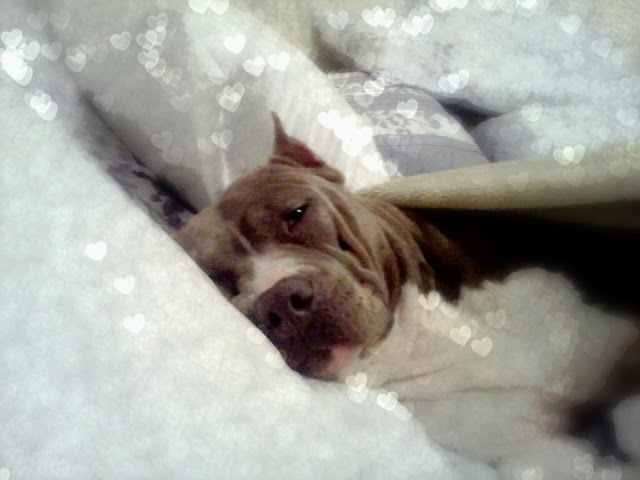 Because it is still February, I went ahead and added some "love" effects to this photo. This sweet picture is of a beautiful pure bred Blue American Pit Bull Terrier named Chunkie. Chunkie's human mom is Alli Malus of Roanoke VA. I know Alli is a big dog lover because I see as many photos of her pup Chunkie on her Facebook pages that everyone sees of my dogs Nitro, Lexi, Bailey and Tallulah on my Facebook page. Is Chunkie just one big Valentine? Thanks Alli for sharing your big Love Bug with us!

The American Pet Bull Terrier (APBT) is a medium sized, solidly built, short haired dog whose ancestors came from England and Ireland. During the 19th century, England, Ireland, and Scotland began to experiment with crosses between bulldogs and terriers, looking for a dog that combined the gameness of the terrier with the strength and athleticism of the bulldog.[1]
In the late 19th century to early 20th century, two clubs were formed for the specific purpose of registering APBTs: the United Kennel Club and the American Dog Breeders Association. The United Kennel Club was founded in 1898, and was the first registry to recognize the breed, with the owner assigning the first number to his own APBT.[2]