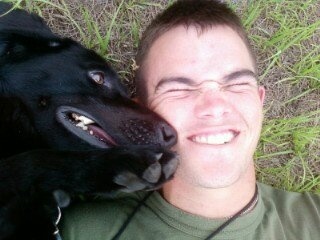 Pfc. Colton Rusk with bomb sniffing dog Eli (cpwda.com)
﻿SAN ANTONIO - The parents of a U.S. Marine killed in Afghanistan are adopting the bomb-sniffing dog who the military says loyally rushed to their son's side when he was fatally shot.
Darrell and Kathy Rusk were expected to take home Eli on Thursday. The black Labrador is being retired from military service following the death of Pfc. Colton Rusk. The military says the 20-year-old Texan died in December during a gun battle with Taliban fighters.

Rusk was the handler for Eli, who is trained to sniff out explosives. After their son was killed in combat, the Rusks asked the military if they could adopt the dog. The transfer will take place at Lackland Air Force Base in San Antonio. The base is training headquarters for all dogs used by the U.S. military.
Read full article here online:
http://www.cpwda.com/k9_handlers_kilod_2010_2019.htm
Posted by Christina at Thursday, February 03, 2011