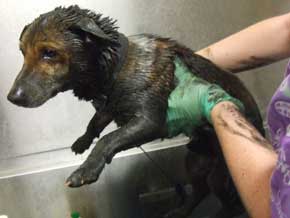 (Diesel getting cleaned up after his long journey. Photo courtesy of Kurth Memorial Animal Shelter)
Story provided by ktre.com   Story by: Holley Nees - Dec 3, 2010
LUFKIN, TX (KTRE) – He traveled from Oklahoma to Texas underneath an 18-wheeler truck.
A truck driver stopped at the Brookshire Brother's warehouse in Lufkin when a Jack Russell terrior mix jumped off the truck. He was covered in grease and road dirt after riding under the truck for nearly six hours.
They called animal control and he's been bathed every day this week and affectionately named Diesel.

"I like his determination that he was staying on there no matter what until the truck stopped and the driver got out and turned off the truck and I guess he decided he was at his destination, so I think he's a pretty cool little dog," said Lufkin Animal Control Director Rhonda McLendon. McLendon said they wanted to find out what city he was from, but he wasn't wearing a collar or tag. 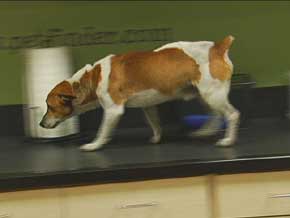 (After photo of Diesel after being bathed everyday this week. Photo courtesy of the Kurth Memorial Animal Shelter)
According to Lexi if this pup had been microchipped, he would be on his way back home. Please microchip your furry babies.
Posted by Christina at Saturday, December 04, 2010