Lexi, Nitro, Tallulah, Bailey, and I are excited to participate in this weeks Saturday Pet Blogger Hop. Special thanks goes out to our Pet Blog Hop hosts, Life With Dogs, Two Little Cavaliers, and Confessions of the Plume! If you would like to read some entertaining pet blogger posts in the Saturday Pet Blogger Hop, just click on one of the host links above or click on the purple Pet Blogger Hop button on the right side of our homepage.

Last Friday I received a message on our Deaf Dogs Rock website pleading for help for a partially deaf 10-week old pibble puppy that was found stranded and scared on the side of a country road in North Carolina. The puppy needed to be rescued and transported or it was going to be dropped the following week at the pound in Gastonia, NC.

Instead of trying to organize a transport for the puppy to get it here to Virginia (which usually takes a lot of time), I decided I would just jump in my car and go get the puppy myself. First I called a local rescue here in Roanoke Virginia called Angels of Assisi to see if they would take the puppy into their rescue once I got it safely back to Roanoke. The folks at Angles said they would take the puppy if I lined up a foster to take care of the deaf puppy first.

I called a young lady named Ashley Leonard who I had recently been in contact with earlier in the month about another deaf puppy that needed help. Ashley also fosters for Angles of Assisi so I thought she would be the perfect person to foster the stranded puppy.  Ashley agreed to foster the puppy once I had it transported from Gastonia, NC  back to Salem VA. So I hopped in the car early Saturday morning and made the four hour drive to pick up the little "pibble". Ashley named the puppy "Madison". She was such a sweet puppy. She was so polite and well mannered that I didn't even have to put her in a travel crate on our ride home. She just laid next to me in the front seat just staring at me for the entire four hour drive home. 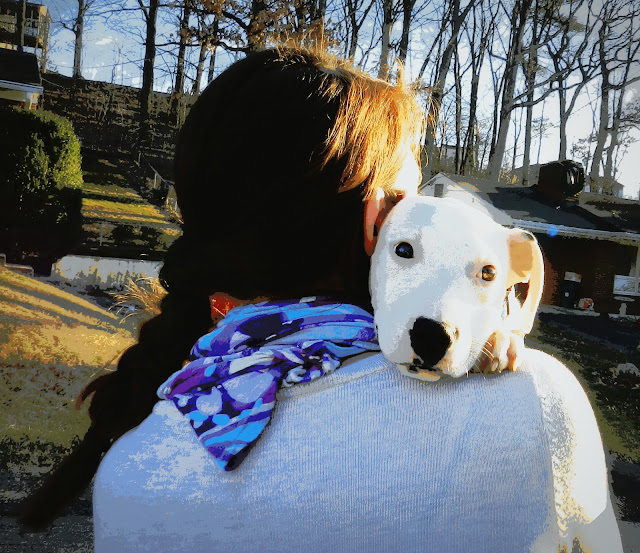 Here is a photo of Madison meeting her new foster Mommy Ashley for the first time (Photo by Christina Lee with special effects added).

Once we got into Salem, I took her over to meet her foster mommy Ashley. Here are some of the photos from my transport and taking her to her new foster home. Enjoy!

On the road to Gastonia! 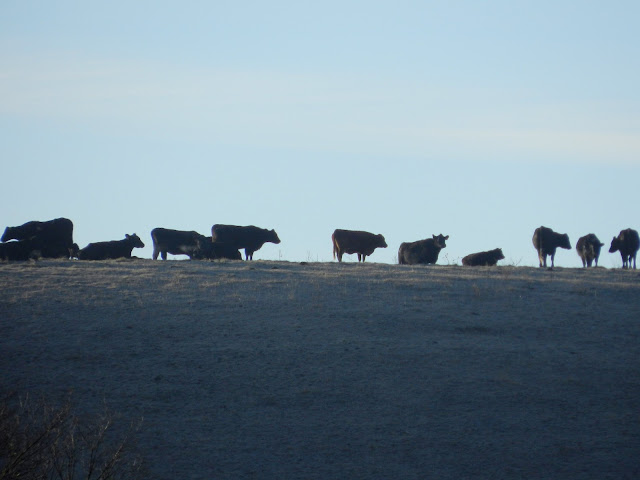 I had to leave by 7:00 a.m. on Saturday morning to travel to Gastonia, NC and make it there safely to Petsmart by 12:00 noon.  While I was at a Truck Stop gassing up my car, I looked up on a hill and decided to take these early morning photos of some sleepy cows grazing in a field while the sun was coming up. 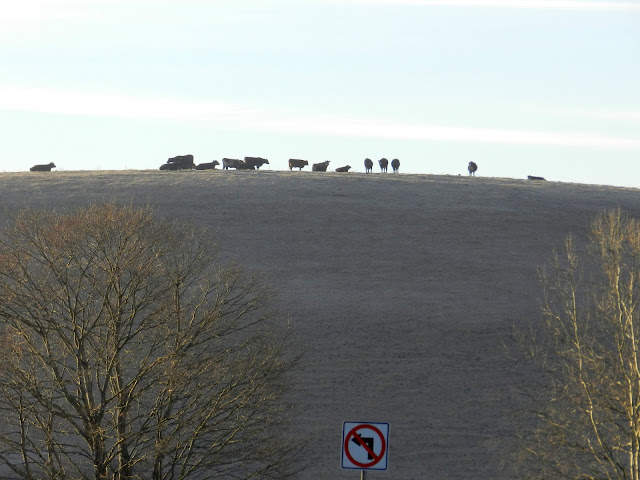 Field full of cows in the early morning sun. This was taken right off a highway exit. 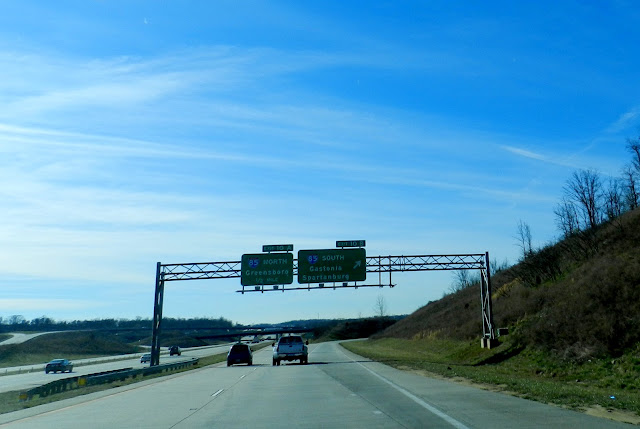 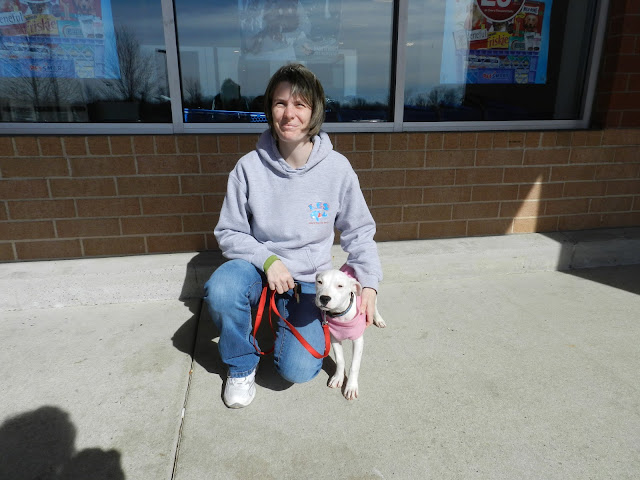 This is a photo of the wonderful woman who saved the little pibble Madison from sure death. Her name is Nicole Huffman and not only did she save the puppy but she took her to her local Vet Clinic to have her de-wormed and to get her shots UTD. Nicole also put Madison into temporary boarding at the clinic until I could get into town to pick her up. Nicole already has 3 small dogs and 3 young children so she wasn't in a position to keep the puppy. Thanks Nicole for saving Madison! 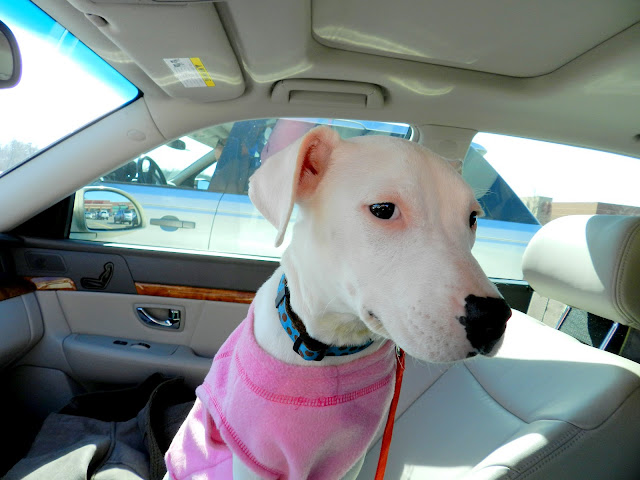 This is a picture of Madison as soon as I set her down in the front seat of my car for the ride home. She doesn't look to sure of me in this shot. 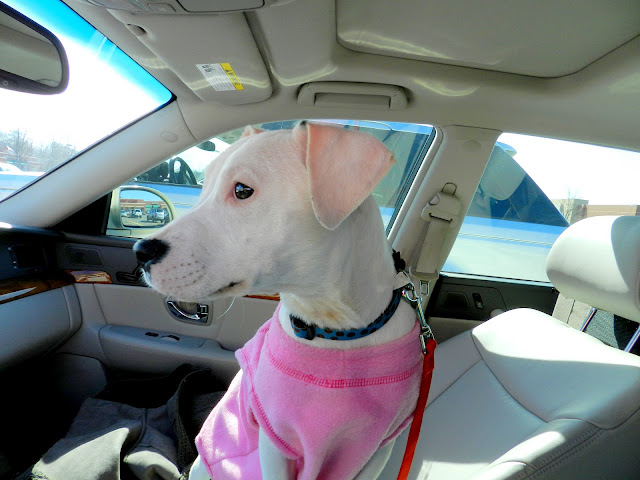 She is just looking around and checking things out. She looks so pretty in her pink sweater. 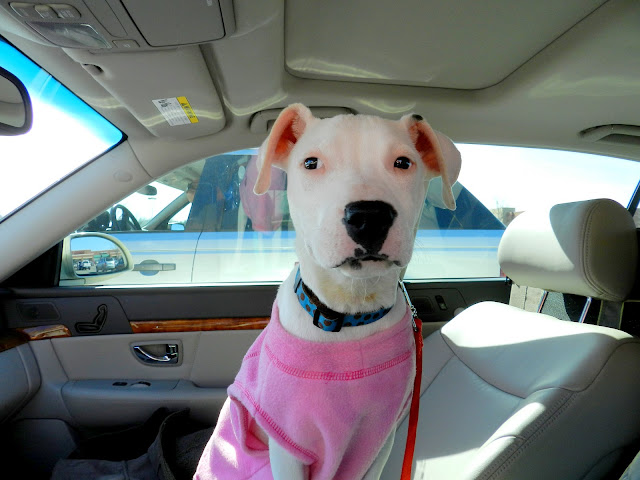 She isn't to sure what to think at this point but then she decides to settle down. Such a cute PIBBLE! 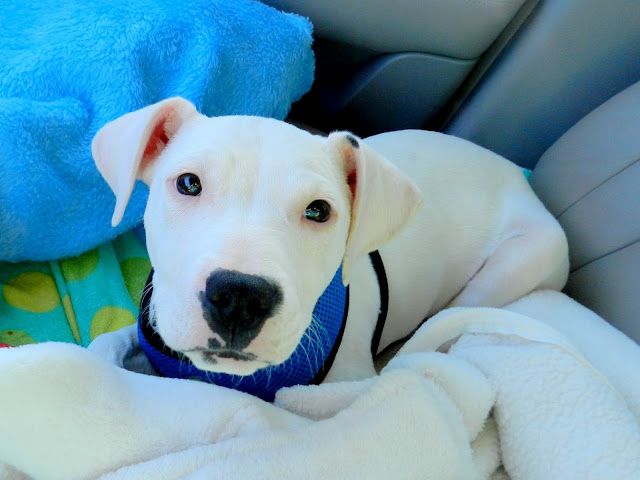 This is how she looked at me the entire ride home. She just stared at me for four hours..I think she was "working it" if you know what I mean. 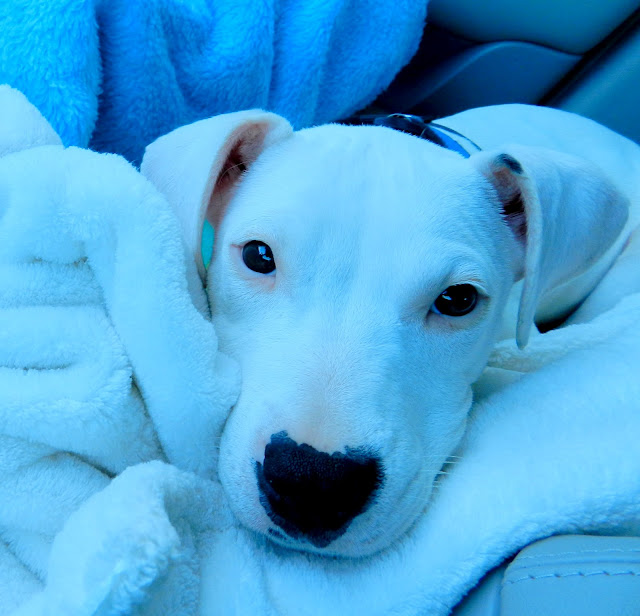 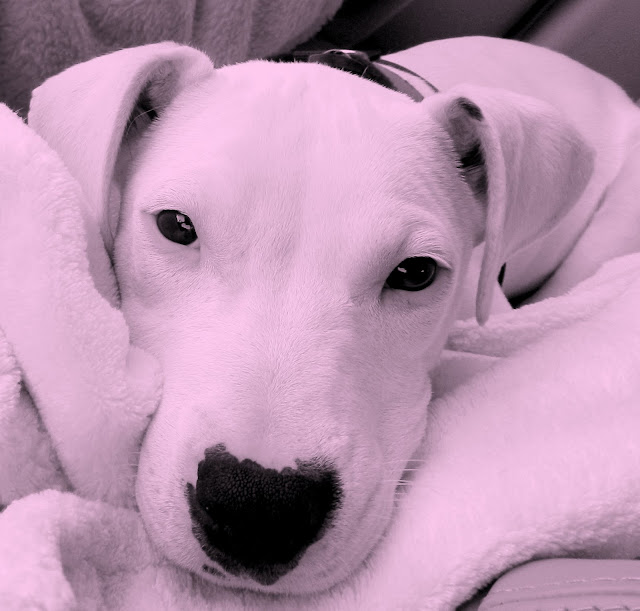 What a little love bug she is...still working it....she is pretty in pink, don't you think? 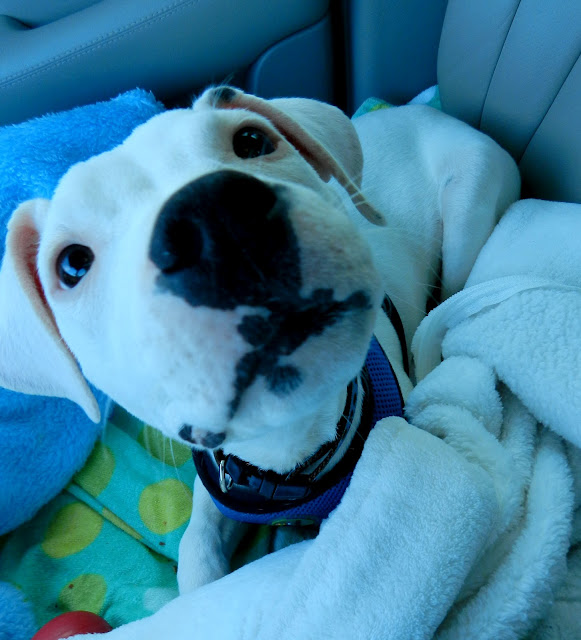 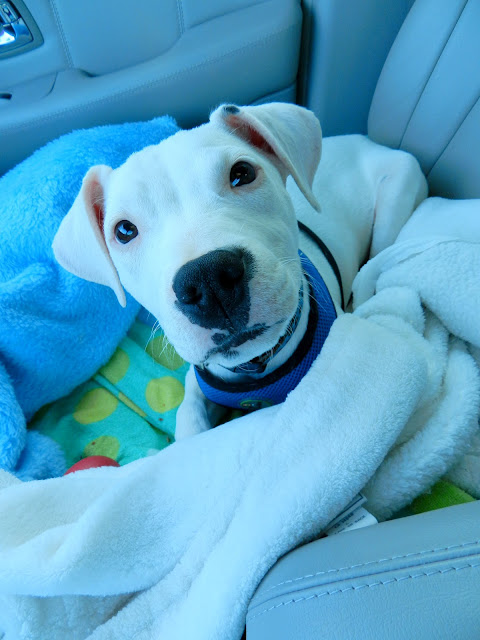 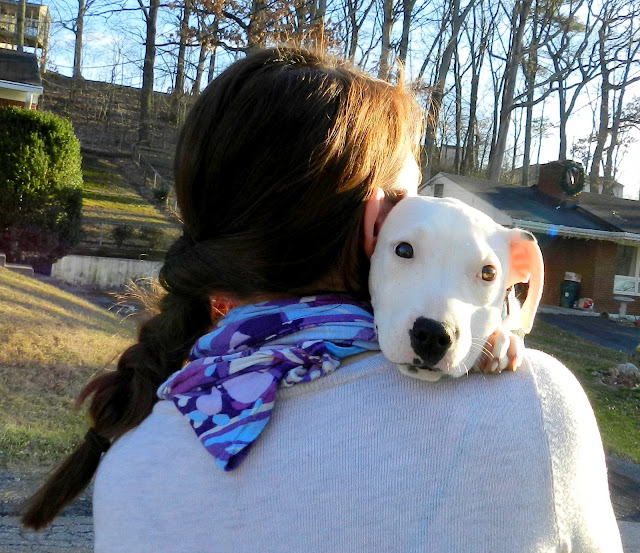 Meeting her foster Mommy Ashley. What a cute pair they make! 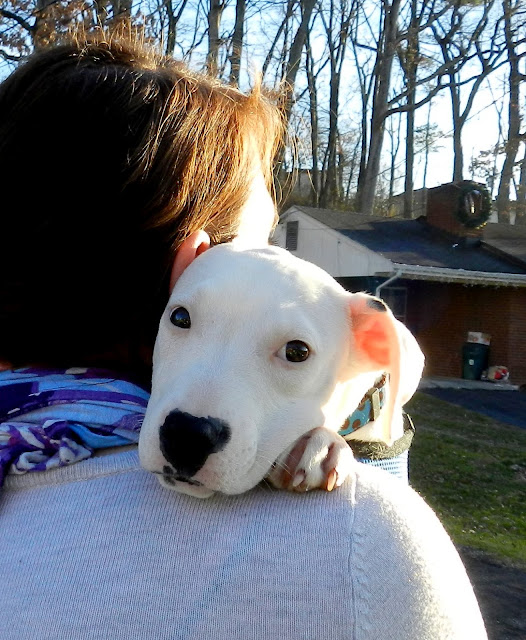 Even in this shot she was still working on me...don't you think? Little bugger girl! 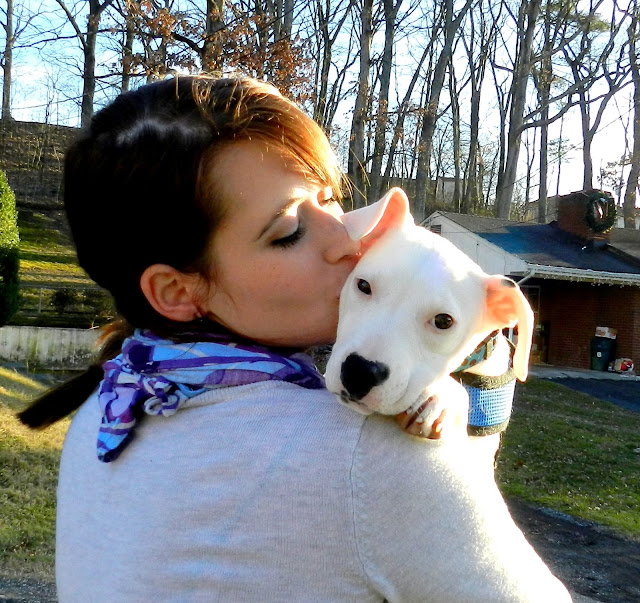 Look at Ashley loving on her...what a lucky puppy! 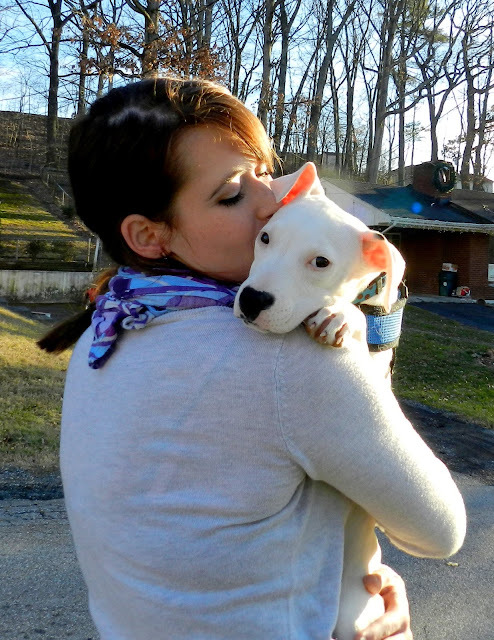 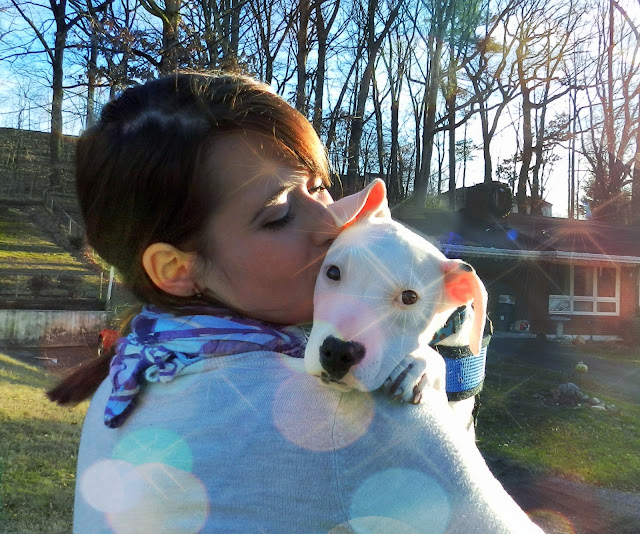 I added some special effects because I could tell this is probably how Madison was feeling and seeing things...she was seeing stars...It turns out Madison does have some hearing so that is good news but we still don't know how much. It seems she can hear things in front of her but not so good behind her. 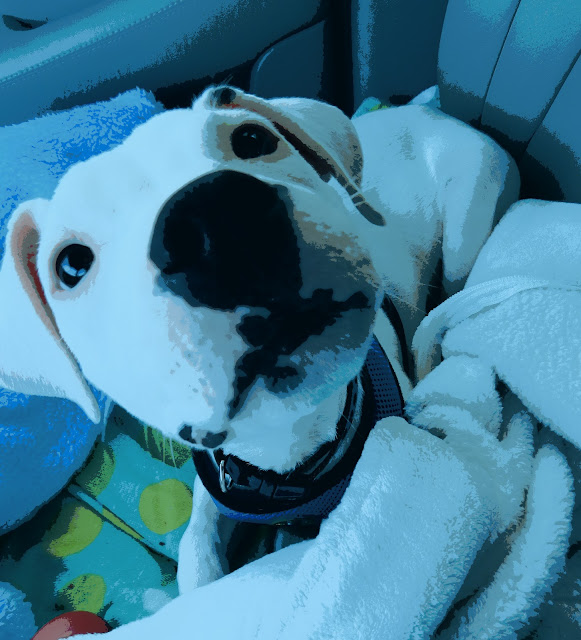 I have another transport to do this Saturday morning. I will transporting two 8-week old beagle puppies for the Augusta Dog Adoptions and Petsmart Charitie's National Adoption weekend being held at the Waynesboro, VA. Petsmart this weekend.
After I get back from that transport, Chris and I get to babysit the little pibble Madison from Saturday to late Sunday. We are both so excited to get the opportunity to have a rescue puppy here on Bluebird Farm this weekend. I think my little pughuahauTallulah and deaf boxer Nitro will be in heaven with this little girl. Lexi and Bailey...not so much. At least Lexi and Bailey will both get a break from Nitro and Tallulah.
According to my dog Lexi, she wishes you all a happy and healthy weekend!
Wiggles and Kisses!
Christina and Lexi
Posted by Christina at Friday, February 10, 2012