Update 1-22-2012: Nitro was chosen by Life + Dog Magazine "Editor's Choice" picks but they also want to do a feature layout and story on Nitro and Deaf Dogs Rock. We are honored, thrilled and excited to participate and tell the whole world that Deaf Dogs Do Rock! Thanks to all of you for voting for Lexi's brother Nitro. According to my dog Lexi, you all totally ROCK!
Lexi, Nitro, Tallulah, Bailey, and I are excited to participate in this weeks Saturday Pet Blogger Hop. Special thanks goes out to our Pet Blog Hop hosts, Life With Dogs, Two Little Cavaliers, and Confessions of the Plume! If you would like to read some entertaining pet blogger posts in the Saturday Pet Blogger Hop, just click on one of the host links above or click on the purple Pet Blogger Hop button on the right side of our homepage.
We need your VOTE! 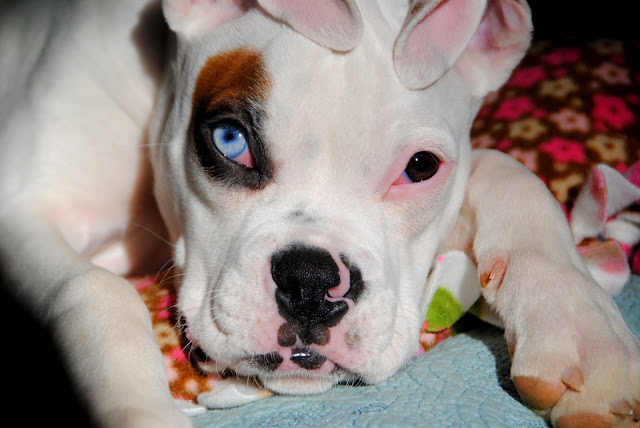 This is the photo we submitted to LIFE + DOG Magazine for a chance for Nitro to win a spot on their Magazine Cover in 2012. Vote at the bottom of this post. Thanks so much!

Nitro, Lexi and I usually do some photo contests just for fun and usually don’t push the “vote for my dog” idea on social media because there are so many folks doing it and sometimes it gets a bit out of hand. I am going to make an exception this time because if Nitro actually has the chance to win an opportunity to appear on the cover of Life + Dog Magazine, it would open up more doors for all the deaf dogs we have listed on our sister blog Deaf Dogs Rock to find new homes.

Can you imagine getting the word out in a major dog magazine about our sister blog Deaf Dogs Rock? So for this reason I have decided to promote voting on Nitro’s photo and I hope you all don’t mind this shameless plug for my dog Nitro’s photo.

If you like his photo, and think he has a good shot at bringing awareness to what we do at our sister site Deaf Dogs Rock (we list deaf dogs that need forever homes all over the U.S.)then I am officially asking for your vote. Please see the link right under his photo below that says “click here” to vote for Nitro. Thanks! You all ROCK! ~ Christina – The World According to Lexi and Deaf Dogs Rock

Please CLICK HERE TO VOTE FOR NITRO.
Posted by Christina at Saturday, January 21, 2012